The head office of Unilever was realized in 2002 at the banks of the Maas river in the city of Rotterdam. The building is named "De Brug" ("The Bridge"), because it is completely build and realized above existing historical buildings and located near the river Maas.

Lichtvormgevers designed the lighting fixtures for the offices but was also responsible for the illumination of the facade. The solution was not as straight forward as it may seem. The illumination of such a large facade from a short distance needs the use of precision spots. The result is an evenly illuminated facade with almost no light pollution and thus a efficient use of energy. Lichtvormgevers made sure that there was no glare for passers outside and users inside De Brug. 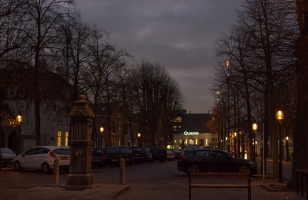